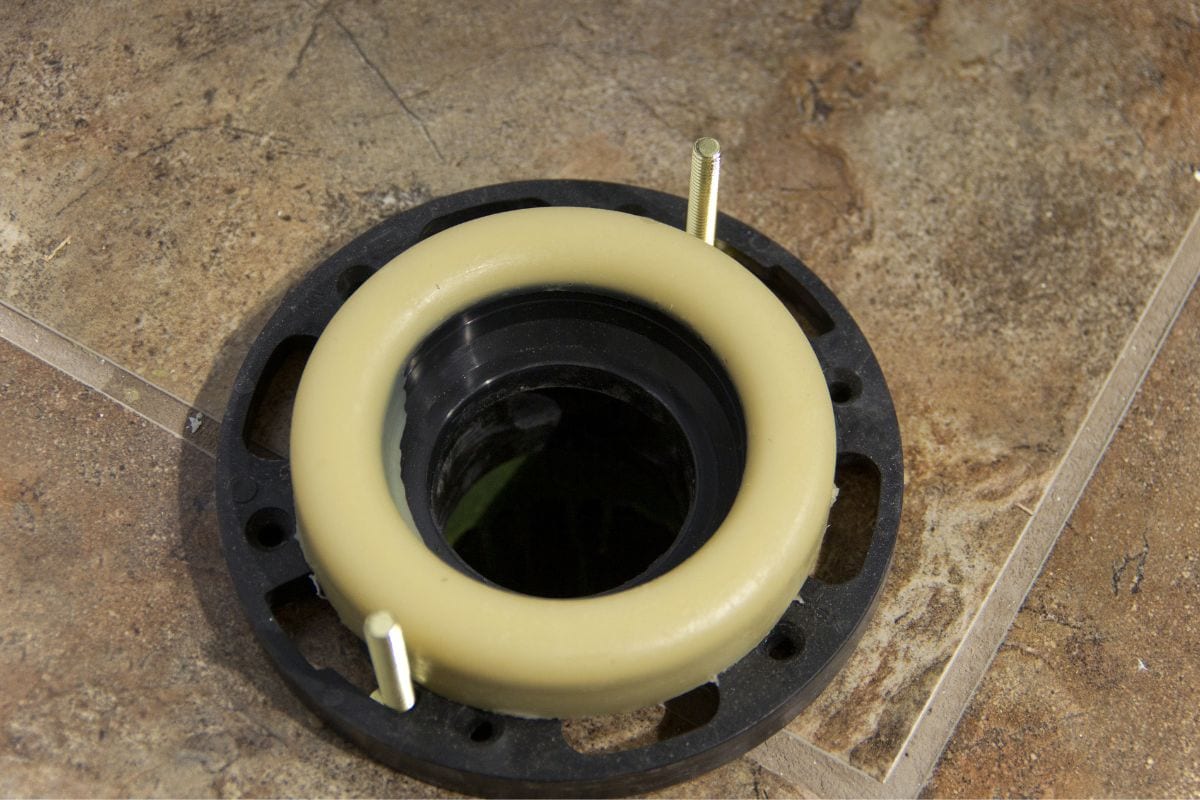 Toilet problems are often scary and troublesome. If you don’t deal with them in the first place they can cause a lot of damage and become costly. However, a little plumbing knowledge will help you cope with them.

Before we move any further on the symptoms of a leaking wax ring, you need to know the purpose of a toilet wax ring.

Function and Importance of a Toilet Wax Ring

Behind every firm and odorless toilet is a great toilet wax ring. As the name suggests, a sticky ring made out of wax is placed underneath the toilet. It is sandwiched between toilet and flange.

The wax ring makes an air and watertight seal to prevent any sewer gases or wastewater from entering the bathroom. It is designed to last a lot of years. Some experts say that it can even last up to 30 years.  However, sometimes it can turn bad way before due to problems with its installation or toilet flange.

4 Symptoms that indicate a leak in Toilet Wax

When the wax ring turns bad or is out of place, you start witnessing some unusual signs. The common signs include water around the toilet base, wobbly toilet, rotting floor and ceiling, and unpleasant odors

#1 Water around the toilet Base

The notable sign of a leaking wax ring is water around the base. At first, water seeps out slowly and you may even know if there is some problem. However, at times you may see water pooling from the base.

Sometimes, there is a possibility that the leak is not from beneath the floor, it is from somewhere else. To confirm, you can add food coloring to the bowl and check if the water around the base changes color. If it does, that means the wax ring has cracked.

The purpose of the wax ring is not only to seal the toilet but also to make sure the toilet stays firm and stable in its place.

When this wax seal is damaged, the toilet’s stability is comprised. It is no longer intact with the ground. If you try to shake it, it wobbles. In addition, when you sit on it, you will get a feeling that the toilet is a bit shaky.

When the air-tight seal formed by wax-ring shatters, sewer gases along with the sewage water enter your bathroom.

These gases are very unpleasant to smell. And the annoying thing is the smell gets stronger and stronger, as time passes. So, if you have been smelling a stronger pungent odor from your toilet, then you need to check its wax ring.

Apart from the toilet itself, the other most affected area is the floor on which the toilet stands. The damage is quite noticeable if the floor is made of wood. However, if the wax ring is damaged, and the issue gets unnoticed, it will rot any kind of floor.

If the toilet is installed on the 1st or 2nd floors, then wax ring damage can ruin the ceiling under that toilet. You will see molds, cracks, and marks on the room’s ceiling which falls directly under the toilet. For instance, if the toilet is on the 1st floor, the ground ceiling will be impacted.

During toilet installation, plumbers usually caulk the spacing around the toilet. However, when the wax ring turns bad, water cannot escape since the toilet is caulked. In this scenario, the water will make its way under the floor, causing damage either to the floor above the toilet or the ceiling, or both of these locations.

The vast majority of plumbers are in agreement that toilet leaks that penetrate the floor or ceiling are extremely hazardous and have to be repaired as quickly as humanly feasible.

What causes the Wax Ring to Fail?

Now that you have known the symptoms of a leak through the wax ring, aren’t you interested in knowing the factors that cause it to fail in the first place?

There are occasions when toilets are not fitted safely. In other instances, they become laxer over time. When toilets have become loose for any reason, they rock back and forth while being used.

The movement of your toilet might displace the wax ring around the toilet, which would result in the wax ring no longer being able to provide a seal.

Wide Gap between Flange and Toilet

Another reason for the wax ring to fail is the wide gap between the flange and toilet.

Wax toilet rings can compress and seal the area between a flange and a toilet, but only within a certain range. Outside of that range, the effectiveness of the toilet wax ring would be compromised.  This usually happens in the case when you have a tiled floor.

External factors like sewage backup can also cause the wax ring failure. When the sewage returning up the pipe builds up enough pressure, it will damage the seal of your toilet wax ring.

A new wax ring doesn’t cost a fortune. You will find it for under $10 from any hardware store. However, its installation is something that might make you crazy. You can either seek professional help or do it yourself by sticking to the mentioned steps.

Find the valve that turns off the water supply to the toilet. It’s mostly on the left side. To close this valve, turn it in the clockwise direction.

You also need to disconnect it from the supply. The supply line goes underneath of toilet; unplug it from that point.

The next step is to make the tank empty; flush it. Take off the tank’s lid and sponge out the remaining water. The tank is now empty but the toilet bowl still contains water. Taking off a toilet that is already partially filled with sewage water would simply make the situation more chaotic. So, take out this water with help of a towel or a sponge. Make sure to use gloves during this operation.

Find the toilet’s side bolts near the base of the bowl. In certain toilets, the bolts are topped with plastic coverings for added protection. Using a screwdriver, remove the caps from the bolts.

Then, loosen the nuts with a wrench. After that, you can simply pull them out with your hands.

The presence of moisture and humidity can sometimes cause the bolts to rust over time. In that situation, you should use a hacksaw to remove the nuts.

Step 3: Take off the toilet

Once you have finished removing the nuts, hold the bowl of the toilet firmly with both hands, and then give it a light shake to properly break up the wax seal.

Place the toilet on one side in a gentle manner. Then, place a cloth inside the drainpipe to prevent the odorous fumes from the sewer from spreading.

Take off the old, worn-out wax ring, and get rid of it. Inspect the flange of the toilet. Check if it needs to be replaced since you will have no trouble doing so at this level.

Now, before inserting the new wax ring, it is advised to soak it in warm water. This makes it fit easily.

Insert the ring on the flange. Then, raise the toilet until it is directly above the flange. Carefully lower it until the bolts are aligned with the two holes in the toilet. You are going to require the assistance of another individual to get the alignment correct.

Tighten up the bolts and reconnect the water line. The toilet is now ready to be used.

Toilet Wax rings do not turn bad more often. However, when they do, the mentioned four symptoms will give you a warning. We hope that this comprehensive article would have guided you on the steps for replacing a worn-out wax ring. 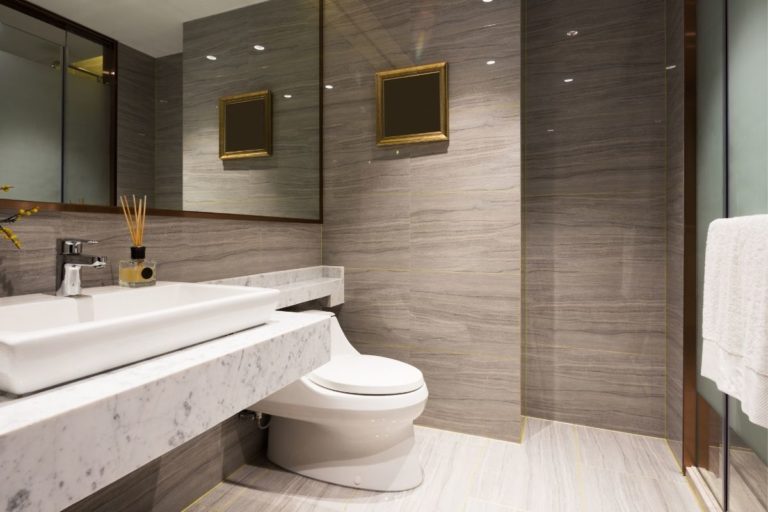 Do you ever take a look at your toilet bowl and see all of that white build-up? If so, you are not alone! Calcium build-up is a common problem in toilets. However, you should get rid of it in the first place before it affects the toilet’s function. One of the most common causes of… 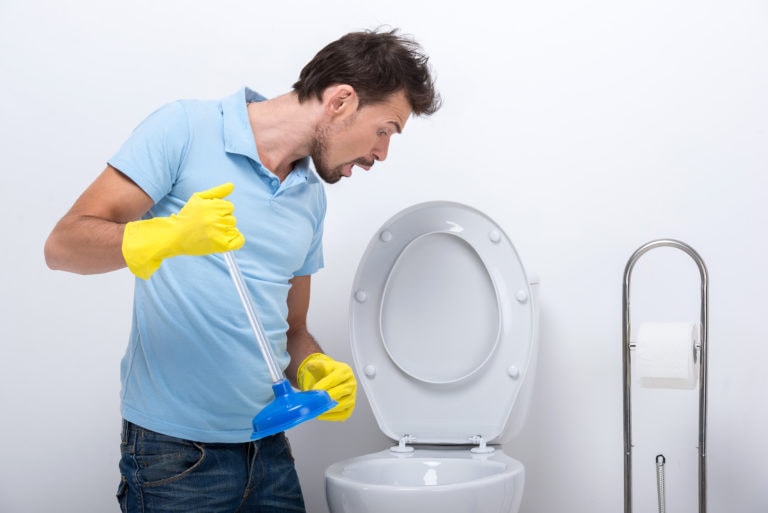 Suppose, you woke up early in order to use the toilet. But to your pure horror, you discover that the toilet is blocked. In this horrifying situation, you may be wondering, “How do you unblock a badly clogged toilet?”  There are several ways to clear a severely clogged toilet. For instance, using hot water and…

A toilet vent stops the sewer smell from getting inside the house. It runs from the plumbing that runs out from the toilet to the ceiling. There are a few different vent designs that can be used, and in this article, I will explain the different options. As a general rule, a vent is installed…

We all use our bathroom so many times a day. We want to make sure that it is built in the best ways, both aesthetically and in terms of space. Of course, the bathroom is a small space, and it is where decorating the back of your toilet comes into play. Putting items together will… 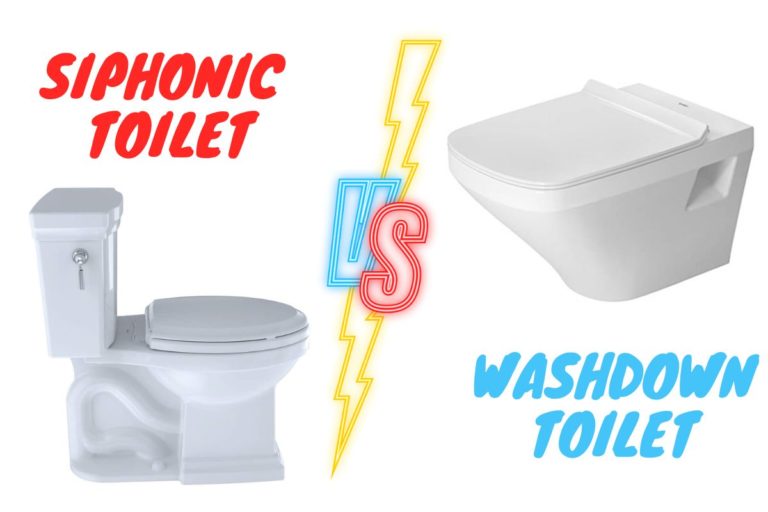 If you’ve ever gone toilet shopping or plan to do so in the future, you’ll notice the terms washdown and siphonic toilet on the product detail page. You might be wondering what that means and whether you should think about it. A siphonic toilet is a type of toilet that uses a siphon to eliminate…